From fields to classrooms: Former Salinas farmworker earns bachelor’s with honors at 58

He plans to get his master’s in education, too. But teaching in Salinas comes first.

Adolfo González has a whiteboard next to the dinner table in his Salinas apartment.

When his granddaughter Kayla has a tough math problem, he breaks from his studies to go over the equation with her in Spanish.

Markers in hand, they calculate together until Kayla, 11, can do them on her own. 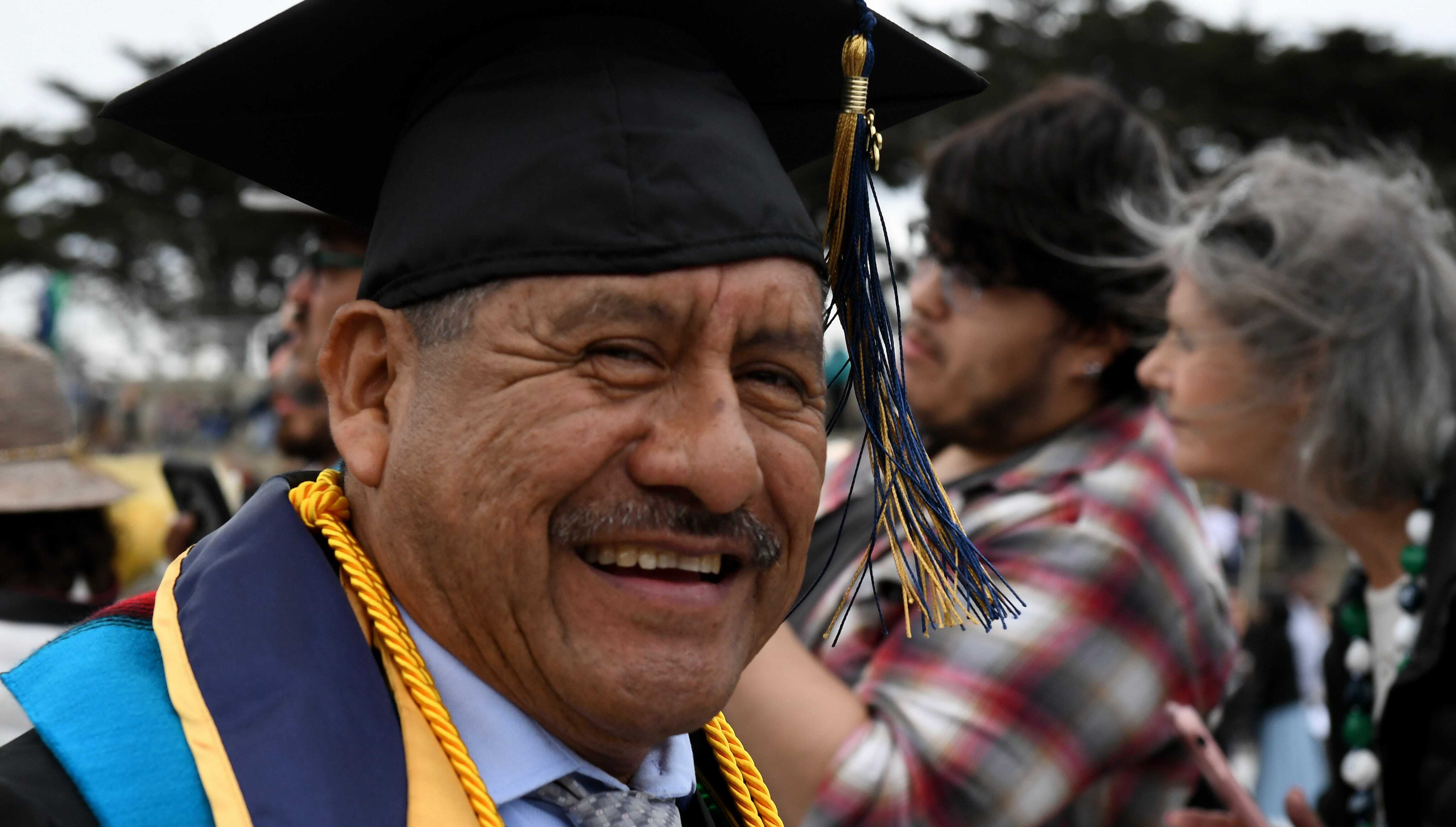 González, 58, learned these methods as a child when he moved from his rural village in México, speaking only his native Zapoteco, to the internal, a school for indigenous youth in the city. Before he dropped out of school, this was before going north to the U.S. to support his mom and siblings.

In the Salinas Valley, he worked for years in celery fields to support his family.

Yet, the former farmworker never gave up on education. He learned English at an adult school. Now, just a year after his daughter became the first in her family to earn her bachelor’s degree, González has one of his own.

On May 18, he beamed as he received his bachelor’s in Spanish from California State University, Monterey Bay — finishing early while receiving academic and service accolades along the way.

He now hopes to help others as a teacher and advocate for educational opportunities.

“I think it’s time our community gets educated.”

While his daughters Marie and Blanca don’t know Zapoteco, González speaks his native tongue to his 3-month-old granddaughter Katelyn. Kayla knows a few words, too.

González says many don’t speak Zapoteco anymore partly due to racism on both sides of the border.

México technically guarantees education to all. But the reality is murkier for González and millions of others from indigenous, Afro-Mexican, or rural communities across the country.

The U.S. Office of Head Start says indigenous people in México have limited access to public education, primarily because rural areas have few schools and the government invests little in education. Most drop out in secondary, the equivalent of junior high.

Indigenous Mexicans also face steep challenges due to discrimination, according to a World Bank 2011 study. Three-quarters of indigenous people are impoverished, far more than other Mexicans.

But it only provided him with a school for two years. At 8, he left his parents in their home village to go to Oaxaca City, hours away, where he found more opportunities in work and education, living with an older woman who looked after him.

That’s where he learned Spanish alongside other poor, native children. He finished primary, similar to elementary school. But around age 12, he dropped out.

“I decided to take a break, not because I wanted, but because I needed money,” he said. “I had to work to help my family.”

In the city, González took jobs ranging from baking to painting so he could send money back to his family in San Andres Yaa.

At 18, he pursued his education once again, but his father died soon after from alcoholism, and González dropped out to provide for his mother and siblings.

Most people from González’s village have gone to Los Angeles to make a better living. They come to work in hospitality, construction, or as garment makers, among other jobs.